Showing posts from November, 2017
Show All

Getting flashy with the Nikon FE 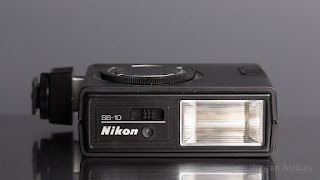 Along with the Nikon FE ( see earlier post: From Voigtlander to Nikon ) there was also a flashgun, the Nikon Speedlight SB-10 (factoid: Nikon use the term Speedlight but Canon use the term Speedlite ). NIKON SB-10, front NIKON SB-10, rear SB-10 mounted on NIKON FE, front SB-10 mounted on NIKON FE, rear When I opened up the battery compartment I was pleased to find the flashgun had been stored without batteries so no leakage. However when I put new batteries in I sadly found the unit was dead. I'm guessing maybe the electrolytic capacitor had failed sometime in the 36 years since the unit was manufactured. So what would make a good alternative to deliver a similar lighting effect to the original unit? Well the SB-10 worked as a manual unit (and also had a limited auto option). NIKON SB-10 Exposure Calculator disc The Guide Number was a very modest 25. My nearest equivalent is a Yongnuo YN560 which offers manual power setting with a max Guide Number of
Post a Comment
Read more

From Voigtlander to Nikon 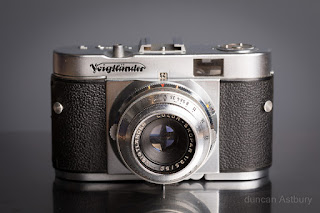 My first ever camera was my grandfather's, a Voigtlander VITO B, dating back to 1958. I put a number of films through this but have not used it recently. My grandfather's Voigtlander VITO B VITO B top panel and lens Note that in addition to ISO the Vito B also has a DIN setting, this refers to Standard 4512 of 1934,  by the Deutsches Institut für Normung. When I say 'setting' the camera is in fact entirely manual so really this just acts by way of a reminder. I now also have my late father's camera , a Nikon FE, it's nice to have them both. The FE dates back to 1981 and was a mid range camera of its day. Voigtlander, 1958 and Nikon, 1981 Nikon FE Nikon FE with Nikkor 50mm 1.8 lens I find a 50mm a little tight, I prefer 35mm or maybe 40mm, however I'm expecting the Nikkor 50 1.8 to be a solid performing prime lens. I can see a number of dust spots but I wouldn't expect these to impact final image quality. The Nikon needed
Post a Comment
Read more

Welcome to my new blog 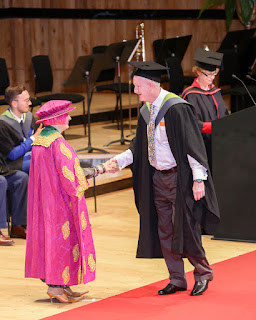 My last blog post was April 2016, on my Advanced Photography Blog , which was dedicated to final studies for a photography degree. I graduated in the summer of 2016, here's me at the University of Creative Arts (UCA) graduation with Zandra Rhodes: UCA Graduation 2016 Since then there's been an absence of posts but not an absence of activity. I've been busy with a mass of things, new cameras, new software, getting up to speed with digital negatives, cyanotype processing and UV lights/meters. Currently I'm poised to make a return to film processing with a plan to run a film through my dad's old Nikon FE camera and so it seemed like a good moment to return to the world of blogging.
Post a Comment
Read more